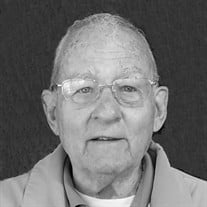 Robert Irvine “Bob” Dunn of Staunton, Virginia, passed away at his home in Brightview Baldwin Park on Monday June 15, 2020. Born July 8, 1932 in Raleigh, NC to Lelia Virginia (Wood) and William M.S. Dunn II, Bob was raised in Virginia, West Virginia, and Ohio. He graduated from Bowling Green State University with a degree in biology, and later established a scholarship at the university in the name of his favorite biology teacher. After graduation, he enlisted in the US Army, where he was stationed in Germany, married and had his first child. In 1957 he returned to the States and began a 30-year career with Merck and Co., retiring as a District Manager in Virginia Beach. He was an avid sportsman, who enjoyed fishing, duck hunting, golf, tennis, skiing, piloting small aircraft, relaxing at his vacation home on the Outer Banks, and playing games of chance and skill with his many nieces and nephews. After retirement, Bob flew for the Civil Air Patrol near Port Charlotte, FL. Later he and his wife moved to Staunton and became members of Trinity Episcopal Church. He joined the senior golf league and became a board member and benefactor of the Staunton-Augusta YMCA, which dedicated a tennis court in his name. Bob was preceded in death by his wife of 45 years, Norma Jean (Mohr) Dunn, and his brother, William M.S. Dunn III. He is survived by two daughters, Gail Dunn (Richard Landreth) of Swoope, VA, and Susan Spencer (Kenneth) of Pickerington, OH; two grandchildren, Chandler and Norma Spencer; a sister and brother-in-law, Susan (Dunn) and Thomas Wiegand; and numerous nieces, nephews, great-nieces, and great-nephews. Bob’s family wishes to thank Shawna, Jack and Mason Dawson for the friendship, love and support they have shown to Bob over the past eight years. They have truly been part of the family. They also extend thanks to the individual staff members at Baldwin Park who have taken such wonderful care of Bob in the eight years he has lived there. Funeral arrangements are being handled by Henry Funeral Home. A private burial will be held at the family cemetery in Nelson County, VA, followed by a celebration of life at a future date. Condolences may be sent to the family at www.henryfuneralhome.net. The family requests no flowers; however, memorials may be made to the Staunton-Augusta YMCA (708 N Coalter St, Staunton, VA 24401), or to the Staunton-Augusta Regional SPCA (33 Archery Lane, Staunton, VA 24401).

The family of Robert I. "Bob" Dunn created this Life Tributes page to make it easy to share your memories.

Robert Irvine “Bob” Dunn of Staunton, Virginia, passed away at...

Send flowers to the Dunn family.