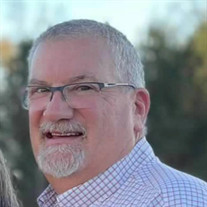 Robert “Bob” Andrew Houle, age 58 passed away Saturday, February 12, 2022 in his home in Charlotte, NC. Born in Manchester, New Hampshire, he was the beloved son of Harold H. Houle and Jaqueline G. Houle. Bob was raised with his three siblings in his favorite state of Virginia where he became an Eagle Scout in 1982 (Troop 186) and graduated from Wilson Memorial High School (Class of 82'). Bob was a proud graduate of West Virginia University (Class of '86) where he earned his Bachelor of Science in Forestry. He also received his Virginia State Teaching Licenses in 1991 through James Madison University. Bob had a passion for scuba diving and was a Dive Master/Instructor. After college, Bob went on to work for the park service before joining the family landscaping business, Houle’s Landscaping, alongside his brother Bruce. In 2012, Bob decided to pursue his passion for scuba diving full-time and became co-owner of Scuba Buddys, a PADI facility located in Harrisonburg, Virginia before returning to landscaping in 2016 at the University of Virginia. In July of 2018 Bob would be called upon to serve as President of Yarbrough-Williams & Houle, Inc following the sudden passing of his brother Marc Houle. Working at his mother’s accounting firm from a young age Bob developed his numeric abilities, affinity for finance and vision in business that has served him and others well throughout the years. Bob was an avid outdoorsman, who loved hunting, gardening, skiing, hiking, boating, scuba diving, underwater photography, astronomy, and more recently, Harleys. The eternal kid in him was also a passionate collector of presidential bobble heads and water themed Legos. Bob was a good-hearted, charismatic man who had a strong inner core underneath his ‘laissez-faire’ exterior. His joviality and good nature attracted people the moment they saw him. He knew no stranger, and no one could forget his boisterous and contagious laugh. Bob is survived by his wife Benedicte “Bea” Thibierge and two sons, Alexander and Loic McWhinney as well as 3 adored fur babies, Coco, Koda and Bordeaux. He is preceded in death by his parents Harold H. Houle, Jaqueline G. Houle and beloved brother, Marc A. Houle. He is survived by his siblings and their families - his sister, Deborah Barnette, her husband, Dudley Barnette and their daughter, Sarah Barnette; and his brother Bruce Houle, his wife, Gloria Houle, their son and daughter, Jacob Houle and Morgan Houle. Even though he was taken too soon, Bob lived an extraordinary life. Pleased join us in celebrating Bob’s life. The family will receive friends on Thursday, February 17th - viewing 10 am followed by service at 11 am - at McEwen Pineville Chapel 10500 Park Rd. Charlotte, NC 28210. A funeral service will also be held on Saturday, February 19, 2022 at 11 am at Henry Funeral Home, 1030 W. Beverley St., Staunton, VA 24401. Interment will follow at Thornrose Cemetery. The family will receive friends one hour prior to the service. The service will be live streamed on the Henry Funeral Home Facebook page at https://www.facebook.com/HenryFuneral

Robert &#8220;Bob&#8221; Andrew Houle, age 58 passed away Saturday, February 12, 2022 in his home in Charlotte, NC. Born in Manchester, New Hampshire, he was the beloved son of Harold H. Houle and Jaqueline G. Houle. Bob was raised with his... View Obituary & Service Information

The family of Robert Andrew Houle created this Life Tributes page to make it easy to share your memories.

Send flowers to the Houle family.