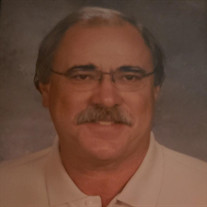 Robert Dale Puffenberger, 67, husband of Sandra (Howell) Puffenberger, of Staunton, died Wednesday, February 19, 2020 at his residence. He was born January 4, 1953 in Staunton, a son of the late Robert W. and Elizabeth (Herbaugh) Puffenberger. Prior to retirement, Mr. Puffenberger was a manager at Daikin with 32 years of service. He was a member of the Fraternal Order of the Eagles 680 and the Staunton Moose. He enjoyed gardening, golfing, bowling, and grilling. Robert was a bowling hall of fame member of the Shenandoah Valley Bowler’s Association, Virginia State Bowling Association, and the Southeast Bowling Association. Mr. Puffenberger loved sports especially the Dallas Cowboys, Virginia Tech, and NASCAR driver Jimmie Johnson. In addition to his wife of 43 years, family members include a daughter and son-in-law, Randi and Derek Almond of Scottsville; a step-daughter, Stephanie Furr of Stuarts Draft; a brother and sister-in-law, John and Peggy Puffenberger of Staunton; five grandchildren, Rachael Roth and husband, Daniel, Sydney Furr, Trevor, Piper, and Ellie Almond; two nieces, Christie Flesher and Torri Howell; sister-in-law, Deborah Umidi and husband, Denis, of Waynesboro; his mother-in-law, Juanita Howell; and a special child, Pedro the dog. He was preceded in death by a sister, Catherine Puffenberger and a brother-in-law, Darrell Howell. A Celebration of Life service will be held from 2 until 5 p.m. Sunday, February 23, 2020 at Staunton Eagles 680. Memorials may be made to the American Heart Association, 4217 Park Place Court, Glen Allen, VA 23060-9979. Henry Funeral Home is handling the arrangements.

The family of Robert D. Puffenberger created this Life Tributes page to make it easy to share your memories.

Send flowers to the Puffenberger family.