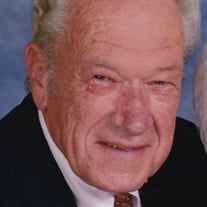 Ronald Wayne Rhinehart went home with peace and dignity on Saturday, February 27, 2021, surrounded by the same love and compassion that he shared on this earth. Ronny arrived in this world on February 6, 1938 to his parents Bertha (Bowers) Rhinehart and C. Richard Rhinehart. An active child, it was sometimes necessary for Bertha to secure Ronny by rope to the kitchen table leg, and, with this loving but necessary guidance, Ronny grew into a respected, respectful, dedicated adult, graduating from Edinburg High School in 1956. On September 24,1959, he finally, officially secured the affections of Patsy Kay Miller; in spite of his appreciation for glass pack mufflers and white wall tires, he and Patsy shared 61 years of life together. He is survived by wife Patsy, daughter Robin Layman and former husband Lester Layman; daughter Rhonda Reeser and husband Brian; sister Nancy Jean Tisinger and husband Buck; sister Sue Eastep and husband Bob; sister-in-law Shirley Orndorff and husband Richard, sister-in law Sandy Burner, brother-in-law Roger Miller and wife Barbara; brother -in-law Richard Burner, and nieces and nephews from coast to coast. Most importantly, his legacy of humility, car care, and Redskins football lives on in the light and lives of two grandchildren, Ally and Brandon, who have no doubt that their granddaddy loved them. Along with the blessings of immediate family, Ronny had many friends through his work and service, with very special recognition for Earl and Carole Barnhart of the 16th Engineer Battalion, Fort Hood, Texas; Charlie and Shirley Spiggle of Southern States Rockingham Petroleum; and Wayne and Nancy Wheeler and all the Confederate Street neighbors in Verona. in his faith, Ronny served as members of the Edinburg Christian and Verona United Methodist Churches. In his deeds, Ronny served on the Board and crew of the Edinburg Volunteer Fire Department over three decades and in the United States Army for two years. In his dedication, Ronny worked for 42 years for Southern States, first as Manager of the Woodstock store and retiring as manager of Augusta Petroleum in Staunton, sharing his genuine warmth on the coldest of winter days. In his 83 years -61 years as a devoted husband, 54 years as a doting father, 42 years as a loyal employee, and 12 years wrapped around the little fingers of his grandchildren - Ronny put his faith, family, friends, and even desperate, demanding strangers before himself. He could leave us with no greater gift. A memorial service will be conducted at 11 a.m. Saturday, March 6, 2021, in the Henry Funeral Home Chapel by the Rev. Bob Weeks. Burial will be at a later date. We would like to extend our deepest gratitude to the crew of the Staunton-Augusta Rescue Squad, and to Dr. Maust , the ER staff, and the medical transportation team of Augusta Medical Center. To Doctors Clouse, Giannis, and Scott, Nurse Kaitlyn, Chaplain Lynn, and the medical team of the UVA TCV ICU, thank you for your endless, selfless sacrifice and heroic efforts as you held our hand and his though the end of a beautiful life. Well done, good and faithful servants. In lieu of flowers, please consider donations to St Jude' s Children's Hospital and the Staunton-Augusta Rescue Squad. Condolences may be sent to the family at www.henryfuneralhome.net.

Ronald Wayne Rhinehart went home with peace and dignity on Saturday, February 27, 2021, surrounded by the same love and compassion that he shared on this earth. Ronny arrived in this world on February 6, 1938 to his parents Bertha (Bowers)... View Obituary & Service Information

The family of Ronald Wayne Rhinehart created this Life Tributes page to make it easy to share your memories.

Send flowers to the Rhinehart family.