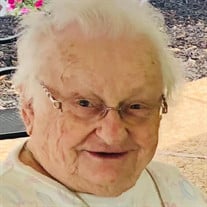 Rosie Lena (Eckard) Marshall, 89, widow of Paul Lee Marshall, of Churchville, went to be with her Lord and Savior, Sunday, July 18, 2021, at The Regency at Augusta, Fishersville. She was born June 13, 1932, in West Augusta, a daughter of the late Ernest Richard and Alma Irene (Griffin) Eckard. Prior to retirement, she was employed by Western State Hospital. She attended Glossbrenner United Methodist Church. She loved to crochet and do word puzzles. In addition to her husband, she was preceded in death by a brother, Layman Eckard. Family members include two sons and a daughter-in-law, Michael Marshall and partner, Jeff Markel, of Fishersville and Steve and Debra Marshall of Churchville; two daughters and sons-in-law, Debbie and Jerry Yount of Fishersville and Cindy and Bob Dodson of Culpeper; a brother and sister-in-law, Richard and Betty Eckard; a sister, Annie Lee Redifer; six grandchildren, Amanda Wilson, Tanya Lowery, Randy Yount, Jessie Yount, Tina Maddox, and Tommy Crummett; and a number of great grandchildren and great, great grandchildren. A graveside service will be conducted at 11 a.m. Thursday, July 22, 2021, at Parnassus United Methodist Church by the Rev. Lester Kennedy. Active pallbearers will be Randy Yount, Jessie Yount, Ricky Wilson, Chris Lowery, Brandon Shoemaker, and Cody Shoemaker. Friends may pay their respects from 10 a.m. until 5 p.m. Wednesday, July 21, 2021, in the Henry Funeral Home. In lieu of flowers, donations may be made to Glossbrenner United Methodist Church, P.O. Box 1016, Churchville, VA 24421, to Hospice of the Shenandoah, c/o Augusta Health Foundation, P.O. Box 1000, Fishersville, VA 22939, or to the Alzheimer's Association Central and Western Virginia, 355 Rio Rd W STE 102, Charlottesville, VA 22901. Condolences may be sent to the family at www.henryfuneralhome.net.

Rosie Lena (Eckard) Marshall, 89, widow of Paul Lee Marshall, of Churchville, went to be with her Lord and Savior, Sunday, July 18, 2021, at The Regency at Augusta, Fishersville. She was born June 13, 1932, in West Augusta, a daughter of the... View Obituary & Service Information

The family of Rosie Lena Marshall created this Life Tributes page to make it easy to share your memories.

Send flowers to the Marshall family.