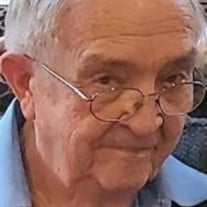 Roy Lee Pilson, 87, husband of Louise Elizabeth (Perry) Pilson, went to be with his Lord and Savior Friday, August 27, 2021 at his home, surrounded by his family. Roy was born on February 11, 1934 in Augusta County to the late John Thomson and Mary Margaret (Erwin) Pilson. He was employed by Dupont as an instrument mechanic. He retired after more than 30 years of service at the Waynesboro Dupont site. Roy was an active member of the Staunton Church of the Brethren. He severed in many capacities throughout his membership with the Church of the Brethren, both at Arbor Hill and Staunton Church. He was very interested in the genealogy of the Pilson family and was the founder and long-time president of the Pilson Family Association. Family was first in Roy’s life. He was devoted to his wife, children, grandchildren and extended family. He enjoyed spending time with family, fishing, watching races, camping and traveling. Roy had visited 49 of the 50 states and enjoyed going on trips and cruises with members of his Wilson Memorial High School graduating class. Among his favorite trips were a cross country trip with his family, a trip to Ireland with his son Nevin, and travel to Alaska with his wife, Louise. In addition to his wife, he is survived by three children, Anita Louise Pilson Fauber and her husband Wilson of Staunton, Nevin Dale Pilson and his wife Christine of Hermitage, and Brenda Carol Pilson Via and her husband Rob of Goshen; a brother, John Pilson of Greenville; a sister, Anna Pond of Chesapeake; seven grandchildren, Heather Fauber MacDanel and her husband Andrew of Staunton, Christy Fauber Swartz and her husband Adam of Staunton, Matthew Pilson of Hermitage, Hannah Pilson of Hermitage, Seth Via of Goshen, Matthew Via and his wife Tiffany of Goshen, and Andrew Via of Goshen; 8 great-grandchildren, Evelyn MacDanel, Rachel MacDanel, Samuel MacDanel, Sarai Swartz, Benjamin Swartz, Cosette Swartz, Abel Via, and Harper Via; and two brothers-in-law, Roger Perry and his wife Cathy of Staunton, and Donald Perry and his wife Jo of Stuarts Draft. In addition to his parents, he was preceded in death by three brothers, Howard Pilson, Wallace Pilson, and Robert Pilson; and a sister, Lavenia Campbell. The family will receive friends from 6:00 P.M until 8:00 P.M. on Friday, September 3, 2021 at Henry Funeral Home and at other times at the home of his daughter and son-in-law, Anita and Wilson, 318 Woodmont Drive, Staunton, with whom Roy and Louise, made their home for the past sixteen years. A Funeral Service will be conducted at 11:00 A.M., Saturday, September 4, 2021 at the Henry Funeral Home Chapel. Burial will follow at Thornrose Cemetery. Active pallbearers will be his grandsons, Seth Via, Matthew Via, Andrew Via, Matthew Pilson and grandsons-in-law Andrew MacDanel and Adam Swartz. In lieu of flowers, is suggested those desiring make a contribution to the Shenandoah District Brethren Disaster Relief Fund at Church of the Brethren, P.O. Box 67, Weyers Cave, VA 24486.

Roy Lee Pilson, 87, husband of Louise Elizabeth (Perry) Pilson, went to be with his Lord and Savior Friday, August 27, 2021 at his home, surrounded by his family. Roy was born on February 11, 1934 in Augusta County to the late John Thomson... View Obituary & Service Information

The family of Roy L. Pilson created this Life Tributes page to make it easy to share your memories.

Send flowers to the Pilson family.