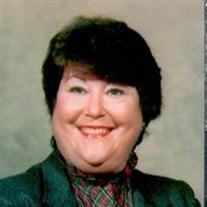 STAUNTON, VA… Sarah (Carlton) Wolters, 79, wife of Orville Wolters, stepped into eternity on Saturday, September 14, 2019. Sarah was born December 16, 1939 in Atlanta, GA, a daughter of the late Carl Daniel and Sarah (King) Gentry and preceded in death by a brother, Wayne Chatham Gentry. Prior to retirement, Mrs. Wolters was an insurance agent for New York Life. She was a proud 2009 graduate of JMU and was a published technical and scientific writer; she was also a paralegal, enjoyed playing the piano and shared her talents with others. In addition to her husband of 27 years, family members include a daughter, Sierra Magee and husband, Steven; a son, Carl Norman Erickson; five step children, Tim Wolters, Tom Wolters, Sherry Wolters, Mike Wolters and wife, Tammy, and Stacey Wolters; four grandchildren, Jordan Erickson, Stephanie Wolters, Briana Wolters and Nathaniel Wolters; and a brother, Roy Gentry and wife, Sheila. A funeral service will be held at 11:00 AM on Wednesday, September 18, 2019, in the Henry Funeral Home.   The burial will be private at a later date in Westview Cemetery in Atlanta, GA. In lieu of flowers, memorials may be made to either Christ Lutheran Endowment Fund, Bethany Lutheran Building Fund or to Samaritan’s Purse.

The family of SARAH C. WOLTERS created this Life Tributes page to make it easy to share your memories.

Send flowers to the WOLTERS family.