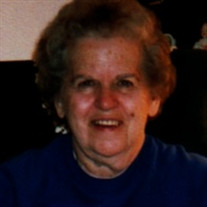 SUE E. ANDERSON Sue E. Anderson, 78, passed on to Heaven on May 16, 2012. She was born on October 22, 1933 in Rockford, Illinois, daughter of Harry E. and Helen M. (Morell) Carlson. She married the late Wendell W. Anderson on July 2, 1954 and lived in Rockford until 2007 at which time she moved to Virginia to be near her family. She was a graduate of East High School, North Park College (Chicago) and Rockford College. She taught early elementary education through the Rockford School District and at Rockford Christian Elementary School. In her retirement years, she worked at the Rockford Public Library. She was a member of First Evangelical Covenant Church (Rockford) and served in the church nursery for over 13 years. Both Sue and Wendell served in the church plant efforts at North Park Covenant Church (Machesney Park). Sue volunteered as a tutor and with Meals on Wheels. She loved to sew, knit, crochet, read and travel. She was an avid Cubs fan and was a doll and teddy bear collector. The joys of her life were her children and grandchildren. Sue is survived by two daughters: Rebecca Higgins and her husband, Richard (Texas) and Annette Sites and her husband, Denny (Virginia); five grandchildren: David Tschetter and wife, Eva (Texas), Erika Grant and husband, Jon (Alaska), Eric Tschetter and wife, Sayuri (California), Kajsa Averill and husband, Tim (Virginia) and Tabitha Taylor and husband, Courtney (Pennsylvania); nine great-grandchildren; two sisters, Elaine Price and Catherine Johnson (Rockford); one brother, Myron Carlson (Illinois); numerous nieces and nephews and lifetime friend, Peggy Landin (Pennsylvania). A graveside service will be held in her memory by son-in-law, Reverend Dennis A. Sites at Scandinavian Cemetery (Rockford) on Saturday, May 26, at 1:00 PM. The family will receive friends at the memorial site one hour prior to the service. Olson Funeral Home in Rockford, Illinois will be handling the services. In lieu of flowers, memorials may be made to Global Ministries (302 Lake Street, Huntington, Indiana 46750) with gifts donated to the George Mueller Children's Home in Hyderabad, India or to Rockford Christian Schools (220 Hemlock Lane, Rockford, Illinois, 61107) with gifts donated to the primary campus. Condolences may be sent to www.henryfuneralhome.net.

The family of SUE ELIZABETH ANDERSON created this Life Tributes page to make it easy to share your memories.

Send flowers to the ANDERSON family.