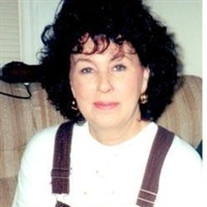 MIDDLEBROOK, VA. Mrs. Sue Blackwell (Cash) Clemmer, 70, wife of Donald Clemmer of Middlebrook died on Sunday, September 1, 2013 at Augusta Health. She was born on March 19, 1943 in Verona, a daughter of the late Marion "Dick" Cash and Margaret (Cash) Steigel. Mrs. Clemmer worked as a beautician for many years. She was a loving wife, mother, grandmother, sister, aunt, and a friend to many. She attended Goshen Baptist Church and loved the Lord, Jesus Christ. She is at peace with Him now. She no longer suffers from pain and sickness. She finally has her mansion in the sky. In addition to her husband, family members include a daughter, Margaret Blackwell Rocco of Middlebrook, and step-daughter Mindy Blankenship of Lake Oconee, GA; a special granddaughter Sarah Blackwell, of Middlebrook, that she loved "the most"; three sisters and brothers-in law, Barbara and Sammy Economus of Charlottesville, Dixie and Mike Johnson of Waynesboro, and Nancy and Gordon Jennings of Staunton. A funeral service will be conducted at 11:00 a.m., Wednesday, September 4, 2013 in the Henry Funeral Home Chapel by Reverends Scott Reese, Tyler Clem, and JoAnn Bunn. The family will receive friends from 6 until 8 p.m. on Tuesday, September 3, 2013 in the funeral home. Memorials may be sent to Goshen Baptist Church, P.O. Box 38, Goshen, VA 24439 and Redeemer Lutheran Church, 6411 Middlebrook Road, 24459.

The family of SUE B CLEMMER created this Life Tributes page to make it easy to share your memories.

Send flowers to the CLEMMER family.