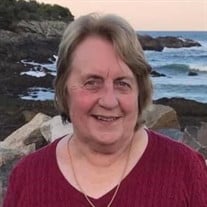 Shirlene Cole Charbeneau, 73, of Stuarts Draft, Virginia went home peacefully to her Lord Monday night, February 1, 2021 at Augusta Health in Fishersville VA, following a sudden and devastating illness. She was born December 28, 1947 in Rutland, VT. Her parents were Charles and Irene Cole and she grew up on the family farm in West Woodstock, VT. She attended Woodstock schools, playing the alto saxophone in band and graduating from Woodstock Union High School in 1966 and later graduating from Rutland Business College. In 1965 her parents built the Cole Farm Restaurant on the farm property, and she waitressed there. She continued farming with her mother Irene following the death of her father in September 1966. She first met her future husband John at vacation Bible school at the Bridgewater VT Congregational church when they were both in elementary school in the 1950’s. She married him on June 19, 1971 at the First Congregational Church in Woodstock, VT. After a honeymoon that included stays at the Lake Mohonk resort in New York state and in Florida, they returned to West Woodstock. Over the years that followed, she was a devoted wife, mother and homemaker, raising three daughters. She worked at several preschool facilities in the area including Sunshine School, Horsefeathers and Green Mountain Children‘s Center. Starting in the late 1990’s she worked for Robert and Carol Powell at their greenhouse in Woodstock, VT until her retirement in 2002. In 2004 she and John moved to Virginia after a more than sufficient number of Vermont winters. She was a member of Wayne Hills Baptist Church in Waynesboro, VA for several years and then became a member of Olivet Presbyterian Church in Staunton, VA. where she sang alto in the choir and participated in the Women’s Circle. She was active in church work and activities all her life. She will be remembered most of all for her strong belief in her Lord and Savior Jesus Christ, her devotion to her husband and family and her sense of humor. She is survived by her husband of 49 years, John Charbeneau of Stuarts Draft VA and their three daughters: Abigail C. Charbeneau and her partner Sarah Dan Jones of Penacook, NH, Anne C. Zapanta and her husband Philip of Lorton, VA and Alison C. Bryant and her husband Richy of Belmont, NH as well as three grandchildren: Jonathan Zapanta, Bekah Zapanta and Joey Bryant. She is also survived by several cousins, her best friends Bobbi Roy, Sharon Hall and Suzan Harlow, and her special cousin Edith Williams. She was predeceased by Charles and Irene Cole, her birth mother Josephine Blanchard and two half-brothers, Duane and David Thomas. Due to COVID-19 there will be no calling hours. Cremation service will be provided by the Henry Funeral Home of Staunton, VA, and inurnment will take place in the spring in Vermont with details to be announced at a later date. The family wishes to express their gratitude to the wonderful and caring staff and physicians at Augusta Health. Donations may be made to Bethany Birches Camp, 2610 Lynds Hill Road, Plymouth VT 05056, which figured prominently in her life and the lives of her daughters and family.

The family of SHIRLENE COLE CHARBENEAU created this Life Tributes page to make it easy to share your memories.

Send flowers to the CHARBENEAU family.