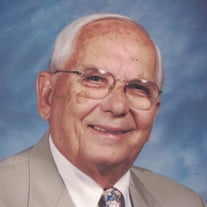 Stanley Glenn Cline, III died Thursday, December 12, 2019 in St. Mary’s Hospital, Richmond. He was born in Staunton on October 29, 1923, the son of S. Glenn and Pauline T. Cline. In addition to his parents, he was preceded in death by two sisters, Janet C. Harman and Elizabeth C. Fleisher. He is survived by his wife of 70 years, Jean Myers Cline of Augusta County, who he took to be his bride on October 8, 1949, and often said it was the best decision he ever made; two sons, Stanley G. Cline IV and Peter S. Cline and his wife, Elizabeth Moore, of Staunton; two daughters, Candace C. Formacek and her husband, Mirek, of Richmond and Sally A. Cline and Frank Liberto of Bracey; five grandchildren, Grayson Cline of Harrisonburg, Calla Cline and Peyton Moore of Staunton, and Eva and Hana Formacek of Richmond. Stan accepted Jesus Christ at the age of thirteen in the First Baptist Church of Staunton where he and his family were members for 57 years. He served in many capacities there as Sunday school teacher, Superintendent of the Sunday school, Chairman of the Board of Trustees, Chairman of the Board of Deacons and Church Moderator. In 1992, he and Jean joined the First Presbyterian Church of Staunton where he served as an Elder, President of the Adult Sunday school class, Trustee of the Church and a Captain of Ushers. He owned and operated Cline Furniture Co, Cline Realty Corp and was a Real Estate Broker, retiring in 1986. Stan was an alumnus of Hampden-Sydney College and the University of Virginia. He was a member of Pi Kappa Alpha Fraternity, the Patrick Henry Society of Hampden-Sydney and the Thomas Jefferson Society of the University of Virginia. He was Secretary of the Staunton Electoral Board, a position he had held for 45 years and on April 9, 2015, was presented a resolution by Staunton City Council honoring him for his long time community service. He was a charter member and first secretary of SACRA (Staunton Augusta Church Relief Association) and was one of the founders and frequent host of both the March of Dimes and Rescue Squad radiothons and was made an honorary member of the Staunton Augusta Rescue Squad. Stan was President and business manager of the Staunton Braves Baseball Team for 7 years. Stan and his wife, Jean, attended every Braves home and away game during that time. Stan was twice President of the Retail Merchants Association of Staunton, City and County Chairman of the March of Dimes and a member of the Salvation Army Advisory Board. He was a Corporator of King’s Daughters Hospital, and served many times on the Boards of the Chamber of Commerce and United Way. He was past President of the former Staunton Exchange Club, a member of the Staunton Lions Club, and former Treasurer and member of the Staunton Republican Committee. In 1954, he received the first Distinguished Service Award given by the Junior Chamber of Commerce for outstanding community service. He was appointed by the City Council to the Ag/Forestal Advisory Committee for the City of Staunton in 2006. Stan’s priorities were his wife, family and his Lord. His favorite pastimes were spending summers at his camp “End of the Creek” on North River and at Myrtle Beach, and University of Virginia football and basketball. He was an avid collector of “Big Band” and Sinatra music. The family will receive friends from 5 until 7 p.m. Monday, December 16, 2019, in the Henry Funeral Home. A memorial service will be conducted at 11 a.m. Tuesday, December 17, 2019, at First Presbyterian Church by Pastor Karen Henn Allamon. Burial will be private for family only. In lieu of flowers, memorials may be made to SACRA, 205 N. Augusta Street, Staunton, VA 24401.

The family of Stanley G. Cline, III created this Life Tributes page to make it easy to share your memories.

Send flowers to the Cline family.