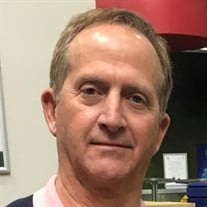 Dr. Stevan Terrell Hanna, 77, passed away on Tuesday, June 7, 2022 at his home lovingly surrounded by friends and family. Born in Charlottesville on July 27, 1944, to the late Dr. Howard Michael and Mary Elizabeth (Elam) Hanna, Staunton was home to Van during his childhood and teenage years. Van graduated Duke University in 1966, then spent the next four years at Medical College of Virginia. After med school Van married his high school sweetheart, Linda DiGrassie, and the two of them moved to Lajolla, CA while Van spent three years as a medical office in the US Navy from 1970 to 1973. After being discharged, Van and Linda, with new baby in tow, moved to Charlottesville while Van completed his residency at UVA Medical Center. In 1977, Van and Linda moved back to Staunton to start his Ear, Nose and Throat practice which he ran until he retired in 2015. Van was kind and considerate with a strong moral backbone. He was a devoted husband, father and grandfather. His passions in life were Duke basketball, golf and poker. Van always had a wry sense of humor which he kept until the very end. In August of 2020, Van was in a bike accident that would leave him paralyzed for the remainder of his life. His fight to recover and ultimately to learn to live with his disabilities was an immense challenge both physically and mentally which he could not have endured as long as he did without the help and devotion of Brad Ashworth, whom the family owes a significant debt of gratitude to. In addition to his wife, he is survived by his sons, Stevan Terrell Hanna, Jr.; David Elam Hanna (Lydia), and Grey Alexander Hanna (Amy); his brother, Dr. William “Bill” Brooke Hanna (Karen); and his grandchildren, Abbey, Thomas, Caroline, and Bennett Hanna. In addition to his parents, he is preceded in death by his brother, Dr. Michael Hanna. In lieu of flowers, memorial donations may be made to Shepherd Center 2020 Peachtree Rd NW Atlanta, GA 30309 www.shepherd.org. The RR Smith Center Mevluda Tahirovic Memorial Garden 20 South New Street Staunton, VA 24401 www.rrsmithcenterforhistoryandart.com

Dr. Stevan Terrell Hanna, 77, passed away on Tuesday, June 7, 2022 at his home lovingly surrounded by friends and family. Born in Charlottesville on July 27, 1944, to the late Dr. Howard Michael and Mary Elizabeth (Elam) Hanna, Staunton was... View Obituary & Service Information

The family of Dr Stevan T. Hanna created this Life Tributes page to make it easy to share your memories.

Send flowers to the Hanna family.