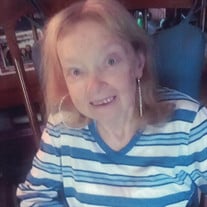 Susan Elaine (Croasman) Spotts, 70, wife of Victor Spotts, of Fishersville, died Thursday, February 27, 2020 at Shenandoah House of Augusta Health. She was born March 25, 1949 in Punxsutawney, Pennsylvania, a daughter of the late Burton Raymond Croasman and Fanny Elder Cruthers. Susan was a 1971 graduate of Radford University. She worked for eight years as bookkeeper at Avante in Waynesboro. She then spent 22 years in administration at Avante and Summit Square. Susan enjoyed reading, knitting and needle point. Mrs. Spotts was a member of St. Francis of Assisi Catholic Church. In addition to her husband of 48 years, family members include a son and daughter-in-law, Ben and Angie Spotts; a daughter and son-in-law, April Lynn and J.C. McDaniel; a sister and brother-in-law, Sally and Harold Harrington of New Port Richey, FL; and eight grandchildren, Landon, Brady, Allie, Rylan, Aimsley, Cooper, Abby, and Jud. The family will receive friends from 6 until 8 p.m. Thursday, March 5, 2020 in the Henry Funeral Home. A Mass of Christian Burial will be conducted at 2 p.m. on Friday, March 6, 2020 in St. Francis of Assisi Catholic Church by Father Joseph Wamala. Burial will follow in Thornrose Cemetery. A Celebration of Life will be held at Valley Pike, 3494 Lee Hwy, Weyers Cave, VA 24486, immediately following interment. Condolences may be sent to the family at www.henryfuneralhome.net.

The family of Susan E. Spotts created this Life Tributes page to make it easy to share your memories.

Send flowers to the Spotts family.