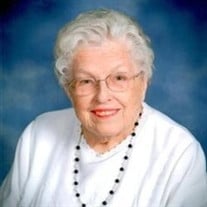 Thelma A. Quick STAUNTON, VA Thelma May (Anderson) Quick, 89, wife of the late Leroy G Quick of Staunton died Sunday February 9, 2014 at Augusta Health in Fishersville. She was born May 31, 1924, daughter of George B and Mabel (Kelly) Anderson in Woodbury, New Jersey. Thelma was educated in New Jersey and graduated from Paulsboro High School in 1941. She went to work for the Bell Telephone Company in New Jersey after graduation. In 1944 she joined the United States Coast Guard and served in Norfolk, Virginia. It was there that she met her husband of 59 years, Leroy Quick of Staunton. They were married in 1945 and moved to Staunton after discharge from the military. They were both members of Pleasant View Lutheran Church. Thelma worked for C & P Telephone Company in Staunton, retiring in 1984 after 39 years of service. In her retirement, she volunteered with Valley Program for Aging Services. She was also involved in many activities at church including the Pleasant Memories seniors group. She traveled several times to Alaska and California to visit family. She spent her final years at Emeritus Assisted Living in Staunton where she enjoyed Bingo with her many friends. Thelma was preceded in death by her parents and husband, Leroy Quick, and a sister Erma A. Hazel of Glassboro, New Jersey. She is survived by 3 children, Edward Glen Quick and wife Margery of Anchorage, Alaska, Diane Elaine Flower and husband James of Verona and, Steven Anderson Quick and fiancé Karen Purcell of Staunton; 7 grandchildren and four great grandchildren. She is also survived by a brother, George Anderson of Mullica Hill, New Jersey, and Tami Harris Quick of Verona. A funeral service will be conducted at 11 AM on Saturday, February 15, 2014 at Pleasant View Evangelical Lutheran Church by Pastor Kenneth Price. Burial will follow in the church cemetery. Active Pallbearers will be her nephews, Jimmy Carrier, Charles Snyder, George Anderson, and Dale Anderson. Also Doug Painter Jr. and Jack Borden. Honorary pallbearers will be Doug Painter Sr. and other members of the Pleasant Memories Seniors Group. The family will receive friends from 6:30 to 8:00 PM on Friday February 14, 2014 at the Henry Funeral Home. Memorial contributions may be made to the Memorial Fund of Pleasant View Evangelical Lutheran Church, 2733 Springhill Road, Staunton, Virginia, 24401.

Thelma A. Quick STAUNTON, VA Thelma May (Anderson) Quick, 89, wife of the late Leroy G Quick of Staunton died Sunday February 9, 2014 at Augusta Health in Fishersville. She was born May 31, 1924, daughter of George B and Mabel (Kelly) Anderson... View Obituary & Service Information

The family of THELMA MAY QUICK created this Life Tributes page to make it easy to share your memories.

Send flowers to the QUICK family.