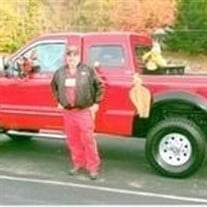 TIMOTHY R. KENNEDY STAUNTON, VA Timothy "Burt" Ray Kennedy, 58, of 151 N. Coalter Street, died Monday, April 14, 2014, in Staunton. He was born on June 13, 1955, in Staunton, a son of the late George William "Bill" and Catherine Marie (Miller) Kennedy. Mr. Kennedy worked in the maintenance department of Mary Baldwin College for 35 years. He was a member of Staunton First Church of God. He enjoyed going to truck shows, having hundreds of trophies, loved NASCAR and worked in a pit crew for Chad Harris. Timothy was a big Dukes of Hazzard Fan. He was a gentle giant with a kind heart and would help anyone. Family members include a brother, Gary Kennedy and wife, Susan; a sister, Rose M. Wagner; and numerous nieces and nephews. He was preceded in death by a sister, Loretta Ann Deal. A funeral service will be conducted at 12 noon on Friday, April 18, 2014, in Staunton First Church of God by the Rev. Sylvia McDorman. Burial will be in Oak Lawn Mausoleum and Memory Gardens. Active pallbearers will be, Jeff Wagner, Jeff Bennett, Dusty Noel, Tommy Campbell, Bernie Wolcott, and Steve Wolcott. The family will receive friends one hour prior to the service at the church. Henry Funeral Home is handling the arrangements.

The family of TIMOTHY RAY KENNEDY created this Life Tributes page to make it easy to share your memories.

Send flowers to the KENNEDY family.