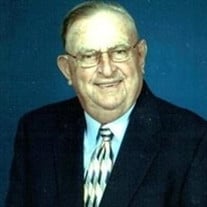 TUNNEY R. SNYDER STAUNTON, VA Tunney Snyder of 1210 Spaulding Street, passed away on October 23, 2012 at King's Daughters' Rehab Center. He was born at Blue Grass, VA on November 25, 1927, son of Richard C. and Lillian Marshall Snyder. He was married to the former Mabel Varner Snyder for 58 years. He was a veteran of the U. S. Army, and retired from American Safety Razor with 36 years of service. He was a member of Christ United Methodist Church. In addition to his wife, family members include a daughter and son-in-law, Rhonda S. and Gary Manuel; a loving grandson, Danny Manuel; a sister, Carol Hall; a brother, Wayne Snyder; and numerous nieces and nephews. He was preceded in death by both parents, and a sister, Hilda Dodge. A funeral service will be conducted at 11 a.m. Saturday, October 27, 2012, in the Henry Funeral Home Chapel by the Rev. Robert Edwards. Burial will follow at Oak Lawn Mausoleum and Memory Gardens. Active pallbearers will be Lynnie Townsend, Bob Vizachero, Delmar Rexrode, James Myers, Larry King, and Bob Groah. Honorary pallbearers will be his nephews. The family will receive friends from 6 until 8 p.m. Friday, October 26, 2012, in the funeral home. The family would like to thank the staff at King's Daughters' Community Health and Rehab for the wonderful care given. In lieu of flowers, memorials may be made to a charity of one's choice.

The family of TUNNEY RICHARD SNYDER created this Life Tributes page to make it easy to share your memories.