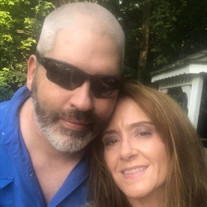 Tania Marie (Lyle) Flavin, 46, wife of Chris Matthew Flavin, of 55 Verona Court Blvd., died Tuesday, September 15, 2020, at Roanoke Memorial Hospital. She was born April 29, 1974, in Staunton, a daughter of Robert Lyle and the late Judith (Arbogast) Lyle. She graduated in 1996 from Mary Baldwin University and worked as a receptionist at Westwood Animal Hospital. She was an ordained minister, a faithful servant of God, and a dog mom. In addition to her husband, family members include, her Little Pretties, Grace, Eden, and Chavah; her father; her step-mother, Becky Lyle; her father and mother-in-law, Bill and Kay Flavin; a sister, Amanda Lyle of Staunton; a step brother, Robert Lyle, Jr.; a brother and sister-in-law, Bryan and Jennifer Flavin; a nephew, Jacob Witt; and four nieces, Emma Witt, Kendall Flavin, Kara Flavin, and Kierstyn Flavin. A memorial service will be conducted at 7 p.m. Monday, September 21, 2020, in the Henry Funeral Home Chapel by the Rev. Jeffrey Myers. The family will receive friends from 5 until 7 p.m. Monday at the funeral home and anytime at the home of her father and mother-in-law, 9 Millstone Drive, Verona. The family would like to send a special thank you to her Westwood Family for all their loving support. Condolences may be sent to the family at www.henryfuneralhome.net.

The family of Tania Marie Flavin created this Life Tributes page to make it easy to share your memories.

Send flowers to the Flavin family.