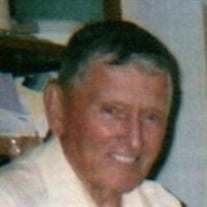 VANCE DANIEL LANDRAM VERONA, VA Vance Daniel Landram, 82, husband of Mertie (James) Landram, of 1493 Laurel Hill Road, died Monday, August 20, 2012, at his residence. He was born May 23, 1930, in Verona a son of the late Ashby David and Lena Virginia (Johnson) Landram. Prior to retirement, Mr. Landram was employed by ASR with 34 years of service. He was a member of Middle River Church of the Brethren and the Woodmen of the World. He loved bowling, fishing, pitching horseshoes, and hunting. In addition to his wife of 61 years, family members include two sons and daughters-in-law, Vance Daniel, Jr., and Joyce Landram and David Thomas and Brenda Landram, all of Verona; a daughter and son-in-law, Darlene and Donnie Henkel of Stuarts Draft; two sisters and brothers-in-law, Kathleen and Doug Davis of Verona and Sylvia Jean and Robert Herman of Waynesboro; a sister-in-law, Jean Landram; six grandchildren, Stephanie Thompson and her husband, Matt, Tracy Painter and his wife, Stephanie, Lisa Crouch and her husband, Tony, Genny Rogers and her husband, Dustin, Tonia Brown and her husband, David, and Lena Wuerzberger and her husband, Randy; and thirteen great grandchildren, Tyler, Cheyenne, and Austin Thompson, Brianna and Jerry Painter, Eric and Jacob Massey, Dominic Brown, Dustin, Kaitlyn, Shyann Wuerzberger, Andrew Hinkel, and Annalyn Rogers. He was preceded in death by a brother, Kenneth Landram. A funeral service will be conducted at 12 noon Thursday, August 23, 2012, at Middle River Church of the Brethren by the Pastor David Ball. Burial will follow in Oak Lawn Mausoleum and Memory Gardens. Active and honorary pallbearers will be his grandchildren and great grandchildren. The family will receive friends from 6 until 8 p.m. Wednesday, August 22, 2012, in the Henry Funeral Home. Memorials may be made to Hospice of the Shenandoah, P.O. Box 215, Fishersville, VA 22939. The family would like to thank the staff of Hospice of the Shenandoah, Dr. Kerry Alexander, and Kathleen Davis.

The family of VANCE DANIEL LANDRAM created this Life Tributes page to make it easy to share your memories.

Send flowers to the LANDRAM family.