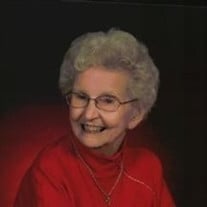 VIRGINIA C. REED HARRISONBURG, VA Virginia Clara (Meadows) Reed, 89, widow of Eugene A. Reed, of Staunton, peacefully passed Wednesday, April 2, 2014, at Emeritus at Harrisonburg. She was born January 13, 1925, in Summers County, WV, a daughter of the late Milburn Rixie and Estelle Raye (Eddy) Meadows. Mrs. Reed was a member of Cherryvale United Methodist Church. She was also past president of AARP-Staunton. In addition to her husband, she was preceded in death by three brothers, John, Ross "Skeeter", and William Meadows; and a sister and brother-in-law, Norma and Warren Wickline. Family members include two sons, Thomas Reed of Leesburg and Steve Reed of Waldorf, MD; three daughters, Shirley A. Cockrell of New Market, Susan Lucido of Moreno Valley, CA, and Carol Naughton of Virginia Beach; a brother, Jesse A. Meadows of Lyndhurst; and a sister and brother-in-law, Mary and Earnest Armstrong of West Augusta; twelve grandchildren; and thirteen great grandchildren. A funeral service will be celebrated at 12 noon on Thursday, April 10, 2014, in the Henry Funeral Home Chapel by the Rev. DeBorah Barnwell. A graveside ceremony will be at 12 noon on Friday, April 11, 2014, in Alderson Cemetery in West Virginia. All are invited for the viewing from 11 to 12 noon Thursday in the funeral home. Memorials may be made to Sentara RMH Hospice, 2010 Health Campus Drive, Harrisonburg, VA 22801.

The family of VIRGINIA CLARA REED created this Life Tributes page to make it easy to share your memories.

Send flowers to the REED family.