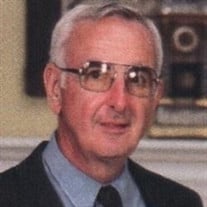 DR. W. EDWARD ARMSTONG, JR. STAUNTON, VA -- Dr. William Edward Armstrong, Jr., 80, husband of Nancy (Cox) Armstrong of 336 Rainbow Drive, Staunton, died Sunday, April 1, 2012, at his residence. He was born November 25, 1931 in Staunton, a son of the late William Edward and Verna Ethel (Taliaferro) Armstrong. Doctor Armstrong received his B. A. from the University of Virginia in 1952, his D. D. S. from the Medical College of Virginia in 1956, and his M. S. Ortho from the University of North Carolina in 1957 before becoming a practicing orthodontist in Staunton. In his later years, he earned his designation as a Diplomat of the American Board of Orthodontists, a very esteemed achievement. He practiced Orthodontics for over 40 years in Staunton, Lexington and Waynesboro. He was extremely proud of the beautiful smiles that he helped create. For 40 years, he was President and Treasurer of beautiful Thornrose Cemetery. He was responsible for overseeing the maintenance and expansion of two new sections. He was very interested in the history of Thornrose, and strove to educate others about it. Also, he was instrumental in bringing the statue of The Lady of Perpetual Care from Italy to its location on the drawbridge at Thornrose. Doctor Armstrong was a member of Trinity Episcopal Church and Staunton Rotary Club. He was a member and past president of Saints and Sinners. In addition to his wife, family members include a daughter, Deborah A. Armstrong, M. D. and her partner Jennifer Breitbarth of Winston-Salem, North Carolina; and a brother and sister-in-law, Don Albert and Jane Armstrong of Buena Vista, a niece Tracey Armstrong Ragsdale and her husband Duane of Richmond, a nephew John Armstrong and his wife Laurie of Buena Vista, two step-sons, Seth E. Hildebrand and his fiance Katie Gray of Charlotte, North Carolina, and Ashton M. Hildebrand of Myrtle Beach, South Carolina. Ed loved Virginia Cavalier football, especially when they were winning. He also loved to travel, spending time at his camp West of Staunton, and his many dogs. His beloved Zack accompanied him to his office daily. His most recent yellow lab, Titus, was his television-watching buddy during these last years. He was very fond of both classical music, especially Mozart, as well as bluegrass, especially the Country Gentlemen and Rhonda Vincent. Ed was a dutiful son, loving father and caring husband to his wife Nancy. A funeral service will be conducted at 11 a.m. Wednesday, April 4, 2012, in the Trinity Episcopal Church by the Rev. Paul Nancarrow and John D. Lane. Entombment will follow in Thornrose Cemetery Mausoleum. His body will be taken from the church to the cemetery in a 1884 horse drawn carriage. Active pallbearers will be Charles N. Bishop, Jr., Wayt B. Timberlake III, James R. Ridenour, Gene Curry, Dr. Charles K. Polly, Dr. Charles W. Wallace, and Dr. Preston C. Manning, Jr. The family will receive friends from 7 until 8:30 p.m. Tuesday, April 3, 2012, in the Henry Funeral Home. The family would like to express a special thanks to his wonderful caregivers, Rolando Smith, Katie Smith, and Vanessa Marshall. Memorials may be made to Thornrose Cemetery Trust Fund, P. O. Box 808, Staunton, Virginia 24402.

The family of WILLIAM EDWARD ARMSTRONG created this Life Tributes page to make it easy to share your memories.