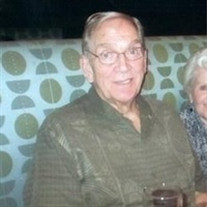 STAUNTON, VA-- William Howard Robertson, 81, husband of Audrey Maxine (Price) Robertson, of Staunton, died November 27, 2012 at his residence. He was born on November 1, 1931 in Augusta County, a son of the late Howard Rice and Irene Victory (Craft) Robertson. Mr. Robertson served active duty in the U.S. Navy from 1951-1953 during the Korean Conflict. He also served in the reserves for four years. He retired from Advance Auto Parts after 38 years as a Division Manager, receiving the Presidential Ring of Excellence. He was a member of Second Presbyterian Church where he has served as Sunday School Teacher, Sunday School Superintendent and Elder. He enjoyed gardening and yard work. Family members include two sons, Mark Anthony Robertson and Matthew Howard Robertson and his girlfriend, Denise Meek, all of Staunton; a number of nieces and nephews; and great nieces and nephews. He was preceded in death by two brothers, Newton Franklin Robertson and James Francis Robertson. A funeral service will be conducted at 10:00 a.m., Friday, November 30, 2012 at Second Presbyterian Church by Rev. Harry Johns. Burial will follow in Thornrose Cemetery. The family will receive friends from 6 until 8 p.m. on Thursday, November 29, 2012 at Henry Funeral Home. The family would like to thank the many doctors and nurses of Staunton Medical Associates, Augusta Health, and Hope Cancer Center for their many years of faithful care. Memorials may be made to The Leukemia & Lymphoma Society, Virginia Chapter, 5540 Falmouth Street #101, Richmond, VA 23230 or to Second Presbyterian Church, P.O. Box 175, Staunton, VA 24401. Condolences may be sent to the family online at www.henryfuneralhome.net

STAUNTON, VA-- William Howard Robertson, 81, husband of Audrey Maxine (Price) Robertson, of Staunton, died November 27, 2012 at his residence. He was born on November 1, 1931 in Augusta County, a son of the late Howard Rice and Irene Victory... View Obituary & Service Information

The family of WILLIAM HOWARD ROBERTSON created this Life Tributes page to make it easy to share your memories.