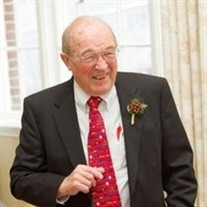 WILLIS L. CLEMMER STAUNTON--Willis Lee Clemmer, 86, husband of Betty Brown Clemmer, passed away peacefully on July 11, 2013, at his residence on Vista Lane. He was born near Fairfield, Virginia, on September 3, 1926, to the late Alva Lewis and Viola Ralston Clemmer and was also preceded in death by his sister Louise Keyser and his brother, Burness Clemmer. During World War Two, while a student at Lee High School, Willis, with the permission of his parents, enlisted as a cadet pilot in the Army Air Corps, returning after the war to complete his high school degree. After graduating from Dunsmore Business College, Willis worked for Smith's Transfer, Westinghouse and retired from Staunton's Public Work Department. His wide and varied interests ranged from camping, antique furniture, Civil War reenacting and musket matches to poker, golf, travel, Jeopardy, and math puzzles, all enlivened by his witty penchant to turn a joke on its head. His particular fascination with automobiles fueled his lifelong passion to restore antique cars. As a member of the Model A Ford Club of America and the Antique Automobile Club of America, the latter for more than half a century, Willis restored a number of old cars, including a 1914 Model T Ford which earned him a National Preservation Award for restoration excellence. In addition to Betty, his wife of 64 years, Willis is survived by his four children and their spouses: Gregg (Linda) Clemmer, Martha (Larry) Dubyk, Susan (Marty) Wayne, and Jane (Tad) Bromfield. Forhis 13 grandchildren and their spouses--Jill (Esrael) Seyum, Daniel Clemmer, Nick (Jenny) Dubyk, Jon(Stephanie) Dubyk, Sarah (Jef) Groesbeck, Katherine Dubyk, Todd Dubyk, Matthew (Linda) Jordan, Justin Wayne, Jesse Wayne, Drew (Juliet) Bromfield, Joseph Bromfield, and Stephen Bromfield --not to mention his 13 great-grandchildren, Willis will always be endeared as "Pop." Indeed, his grandchildren will serve as his honorary pallbearers. Other surviving members of his family include his sister Maxine(Jim)Fitzgerald, and numerous nieces and nephews. The family will receive friends at Henry Funeral Home from 6 to 8 pm on Sunday, July 14, 2013. A memorial service will be held at noon on Monday, July 15, at Second Presbyterian Church where Willis was a member for more than 70 years, with a reception to follow. Internment in Thornrose Cemetery will be private. The family requests in lieu of flowers, donations be made to Hospice of the Shenandoah.

WILLIS L. CLEMMER STAUNTON--Willis Lee Clemmer, 86, husband of Betty Brown Clemmer, passed away peacefully on July 11, 2013, at his residence on Vista Lane. He was born near Fairfield, Virginia, on September 3, 1926, to the late Alva Lewis and... View Obituary & Service Information

The family of WILLIS LEE CLEMMER created this Life Tributes page to make it easy to share your memories.

Send flowers to the CLEMMER family.