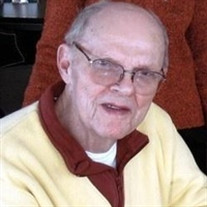 WILLIAM T. BAUER STAUNTON William Thomas Bauer, 87, of 820 Quick's Mill Road, Staunton, widower of Daphne Bauer, died Tuesday, June 5 at his residence. Mr. Bauer was born November 7, 1924 in Boston, Massachusetts to William and Margaret (Shea) Bauer. He was a retired Chief Petty Officer in the Navy after serving for 21 years and a veteran of World War II. Mr. Bauer was an Electronic Technician specializing in Satellite Communications. Family members include a son, William Bauer and his wife Lisa, of Harrisonburg; four daughters and their husbands, Sue and Clark Cook, Karen and Rick Fauber of Staunton, Valerie and Clyde Smith of Portsmouth, Rita and Steve Jamell of Williamsburg; one sister, Carol Goverman of Massachusetts and her children Phyllis Rosen, Brad and Sandy Goverman, William and Heidi Goverman; seven grandchildren and their spouses, Dwight Dart, Clark and Tonia Cook, Stephanie and David Jetton, Milissa Petty, Jason, Megan and Sarah Bauer; great-grandchildren, Jasmine and Zac Cook, Sibbie and Watts Jetton. William is also survived by his wife Alice and his stepchildren and their spouses, William and Debbie Stott, Lisa and Cliff Willey, Jeannie and John Pfleuger as well as nine step grandchildren. He was preceded in death by his parents, a sister, Phyllis Barth and a granddaughter, Samantha Jo Cook. A memorial service will be conducted at Pleasant View Evangelical Lutheran Church, followed by military honors at the graveside. The family will receive friends at other times at the home of Rick and Karen Fauber of 820 Quick's Mill Road, Staunton. Memorial donations may be made to the Change for Hope Fund at the church, 2733 Springhill Road, Staunton, VA. Condolences may be sent to the family online at www.henryfuneralhome.net.

The family of WILLIAM THOMAS BAUER created this Life Tributes page to make it easy to share your memories.

Send flowers to the BAUER family.