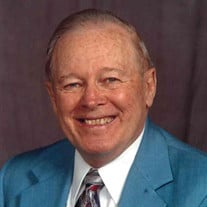 ROANOKE - William Brydon "Pete" Floyd, 92, widower of Mildred G. Floyd, formerly of Westmoreland Dr., passed away September 11,2021 at the Virginia Veterans Care Center in Roanoke,VA. He was born in Madison Heights, Virginia September 9, 1929 a son of William Brydon and Alene Abbott Floyd. Pete moved to Staunton and graduated from Robert E. Lee High School. He served in the Air Force during the Korean War. After leaving the military, he was employed as a Clerk with the US Postal Service. Pete was a VHSL Official for over 40 years and referred and umpired various sports at both the high school and college level. In his younger days he played for the Staunton Braves. The YMCA played an important part in his life. He started refereeing at the Y while still a high school student and served as interim Executive Director in the 1980's. Pete was a well-known stamp, coin and tobacco memorabilia collector and helped many young people start their collections. Pete was preceded in death by his parents, his wife of 50 years, Mildred Gibson Floyd, and his sister, Gypsy Floyd John. He is survived by his daughter, Cathy Floyd Sterrett and Charles Cox, his beloved grandchildren Adam Sterrett and wife Kathryn of Charleston, SC and Carrie Ann Sterrett (Trey Chick) of Charlottesville, VA. Great grandchildren Andrew Sterrett Counter, Boden Alexander Sterrett, Claire Marian Chick and Carol Reid Chick. The family will receive friends from 6 until 8 pm, Tuesday, September 14, 2021 at Henry Funeral Home. A graveside service will be conducted at 11:00 a.m., Wednesday, September 15, 2021 at Oak Lawn Mausoleum and Memory Gardens by Lisa Craig. Memorial donations may be made to the Staunton-Augusta YMCA, 708 N Coalter Street, Staunton, VA 24401.

The family of William B. Floyd created this Life Tributes page to make it easy to share your memories.

Send flowers to the Floyd family.