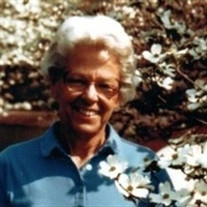 YULEE R. LARNER STAUNTON, VA YuLee (Ruff) Larner, 89, widow of Matthias W. Larner, Jr., of 31 Woodlee Road, died Tuesday, April 9, 2013, at Brightview at Baldwin Park. She was born August 29, 1923, in Sangerville, a daughter of the late James Clay and Mary Belle (Melton) Ruff. YuLee was a noted organist and piano instructor for many years. Her love of birds was reflected through her writings and through her involvement in Augusta Bird Club and as President of Virginia Society of Ornithology. In 2007, she received the Algernon Sydney Sullivan Award from Mary Baldwin College. She was a member and former Director of Music of Covenant Presbyterian Church. Family members include two daughters and sons-in-law, Mary and William R. Shiflet, Jr. of Ellicott City, Maryland and Sarah and Tracy Wilkins of Riner, VA; granddaughter, Sarah Poulton and her husband, Shaun of Maryland; grandson, Clay Shiflet and his wife, Sarah Murray of Colorado; and five great grandchildren. A memorial service will be conducted at 1:00 p.m. on Friday (April 12, 2013) in Covenant Presbyterian Church by the Rev. John C. Peterson. Burial will be private at Thornrose Cemetery. The family will receive friends following the memorial service. At her request, there will be no public viewing. In lieu of flowers, memorials may be made to the Augusta Bird Club, c/o Penny Warren, 215 Kalorama Street, Staunton, VA 24401 or to Covenant Presbyterian Church, 2001 North Coalter Street, Staunton, VA 24401. Henry Funeral Home is handling the arrangements.

The family of YULEE RUFF LARNER created this Life Tributes page to make it easy to share your memories.

Send flowers to the LARNER family.